Known as the “Showtime” period, it is one of American sports’ most renowned eras – the rise of the LA Lakers basketball team in the 1980s.

More than just sports stars, the LA Lakers helped roll out the red carpet to merge celebrity and sport in the US.

New comedy drama Winning Time: The Rise Of The Lakers Dynasty tells the story of their highs and lows, focusing on the professional and personal lives of the team, as well as the coaches and staff around them, and the glitz and the glamour during that famous period that saw them win five championships. 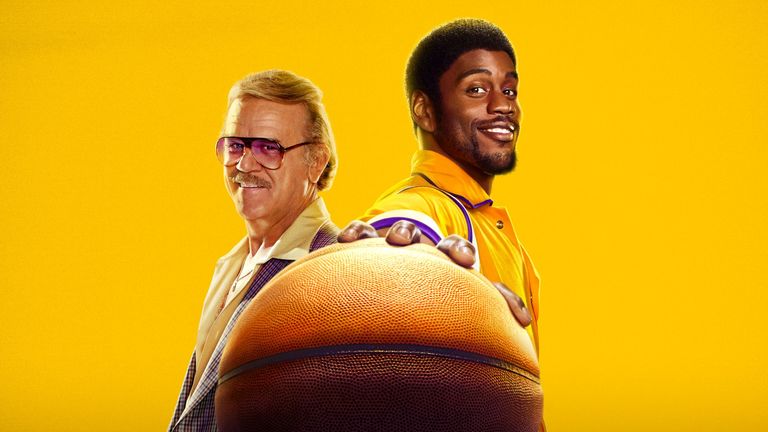 Isaiah told Sky News that playing “an iconic figure” such as Johnson, widely considered to be one of the greatest basketballers of all time, was “a lot to think about and take on”, but that he approached the role from the same standpoint as if he was playing a character.

“You want to make sure that you bring the human [side] to whoever you play, regardless of who it is,” he said. “So I just put in a lot of research and the producers gave me a lot of videos and resources. I was able to read books and just really try to figure out who Magic was during that period of time, at 20 years of age in 1979, moving from Michigan to LA.” 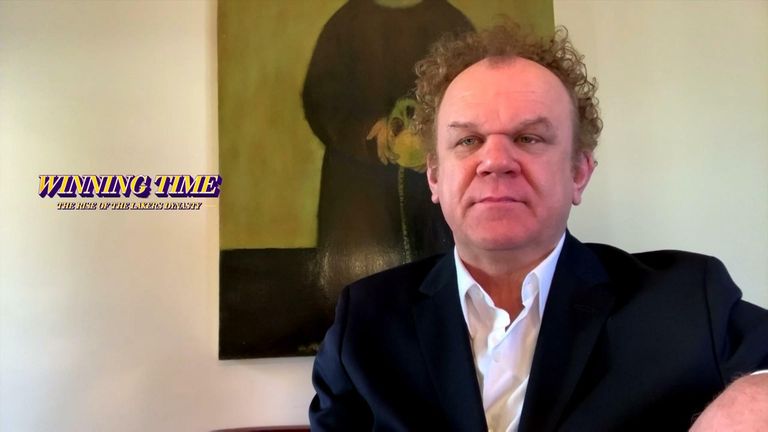 Johnson and others who were part of that era, such as fellow star player Kareem Abdul-Jabbar (played by Hughes), have not been involved in the series, and reportedly aren’t big fans of the story being told in this way. Isaiah says there were no talks with Johnson about playing him.

Reilly, known for his roles in comedies such as Anchorman and Step Brothers, as well as other films such as Boogie Nights, Stan And Ollie and most recently, Licorice Pizza, says there are certain considerations when taking on the role of a real person.

He said: “You’re thinking, well, what is their family going to think of this? I try to approach it with respect and tried to honour his memory at the same time as I tried to tell the truth, as much as we can.” Image: The real Jerry Buss and Magic Johnson pictured at the ceremony for Buss’s star on the Hollywood Walk of Fame in 2006. Pic: Kevin Reece via AP

Buss, who died in 2013, is the “narrator of the piece”, says Reilly, who breaks the fourth wall with his character. In real life, he was a “pretty private person”, the actor says he discovered. “We filled in a lot of blanks. So it’s not exactly a real-life character, it’s sort of inspired by Dr Jerry Buss.”

Winning Time sees Reilly teaming up once again with executive producer Adam McKay, the filmmaker behind recent climate change satire Don’t Look Up, as well as The Big Short and Vice. Reilly worked with him on Anchorman, Step Brothers and Talladega Nights.

McKay is second only to filmmaker Paul Thomas Anderson – who directed Boogie Nights and Licorice Pizza, as well as Magnolia and Hard Eight, which Reilly also appeared in – when it comes to the actor’s favourite people to work with on set.

“No good idea is not worth trying,” he said. “Even some bad ideas are worth trying. There’s just a great feeling of freedom and empowerment when you work with Adam and it’s a lot of fun, we just laugh a lot and there was a lot to… even though this is a very dramatic piece, there’s a lot to laugh about with the differences in the way society worked back then.

“I mean, it’s relatively recent, but it’s kind of crazy the changes that have happened since the 1970s, between men and women, between races, between, you know, the way basketball works these days compared to then. A lot of huge changes in a relatively short time.”

“It’s meant to teach but [also] entertain, you know, and just show you a period of time, of 1979, 1980s, where it just walks you through the history of not only the NBA, but the culture and how there is this shift in America,” Isaiah added.

“It’s just showing how global this game became and the people that are behind it, the humans behind it… see who helped create this global empire that’s now known as the Los Angeles Lakers.”

Winning Time: The Rise of the Lakers Dynasty available from 28 March on Sky Atlantic and streaming service