Europe’s oldest prosthetic limb, a sky disc map of the stars, and a chalk drum dubbed “the most important piece of prehistoric art” to be found in Britain in 100 years are going on show as part of a spellbinding new Stonehenge exhibition.

A rare Bronze Age timber circle, discovered in Norfolk in 1998 and called “the Stonehenge of the Sea”, is also among the exhibits.

Ten years in the making and involving thousands of pieces on loan from collections around the world, The World Of Stonehenge is The British Museum’s attempt at explaining the advanced depths of knowledge within Neolithic communities. 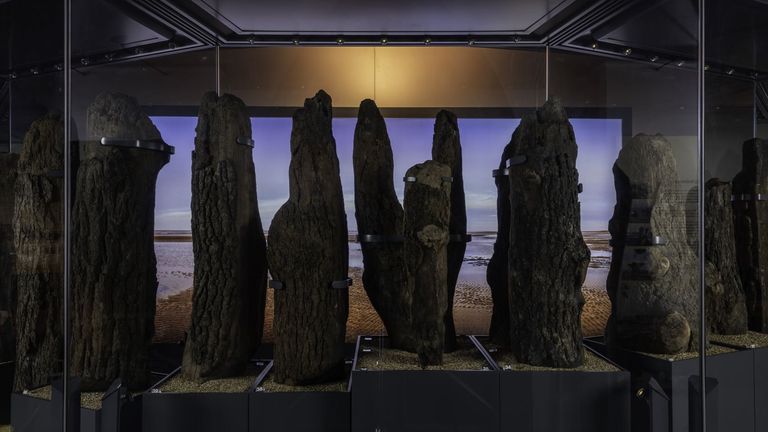 Built about 4,500 years ago at around the same time as the Sphinx and the Great Pyramid in Egypt, the prehistoric monument in Salisbury, Wiltsire, has long fascinated the hundreds of thousands of people who visit the site each year.

The World Of Stonehenge is the UK’s first ever major exhibition on its story.

“I think we all feel we know Stonehenge, it’s very familiar to us, it is an iconic global monument,” curator Neil Wilkin told Sky News. “But what we wanted to do is put it into context, to understand the people who lived in that world.

“The monument can seem quite shadowy and it can seem quite devoid of humans really, so what we wanted to do is bring objects to tell the stories of the people… right across Britain, Ireland and northwest Europe as well.”

While the exhibition cannot include Stonehenge itself, it does feature “Seahenge”, the wooden monument which re-emerged on a remote Norfolk beach as sands shifted in 1998.

Consisting of a large upturned tree stump surrounded by 54 wooden posts, experts say it is a “hugely significant” piece that helps “tell the story of the shared beliefs that inspired ancient communities to build the many astonishing monuments found across Britain, Ireland and beyond”. 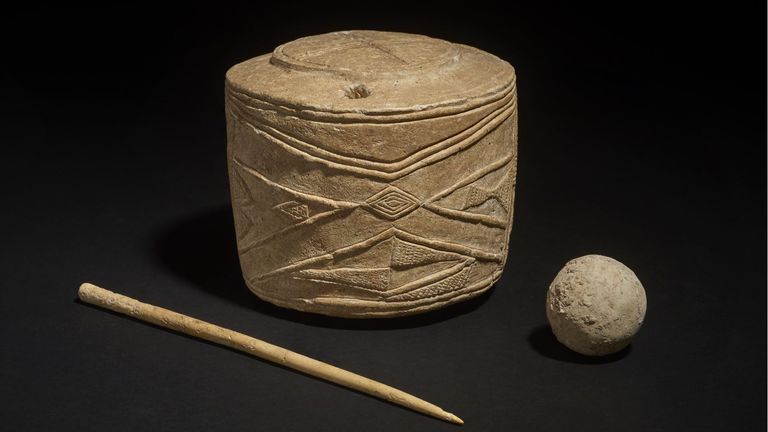 Image: The Burton Agnes chalk drum, chalk ball and bone pin, circa 3005-2890 BC. Pic: Trustees of the British Museum

Among the most poignant of stories told through the exhibition is that of the Burton Agnes chalk drum, a 5,000-year-old chalk sculpture. Discovered on a country estate near the village of Burton Agnes in East Yorkshire, archaeologists describe it as one of the most significant ancient objects ever found on the British Isles.

This exhibition is the first time it has ever been shown to the public.

“It was found a couple of years ago… and is one of the most important pieces of prehistoric art from Britain, certainly in the last 100 years,” Mr Wilkin said.

The drum’s discovery within a gravesite containing three children aged between three and 12 made the finding all the more significant. 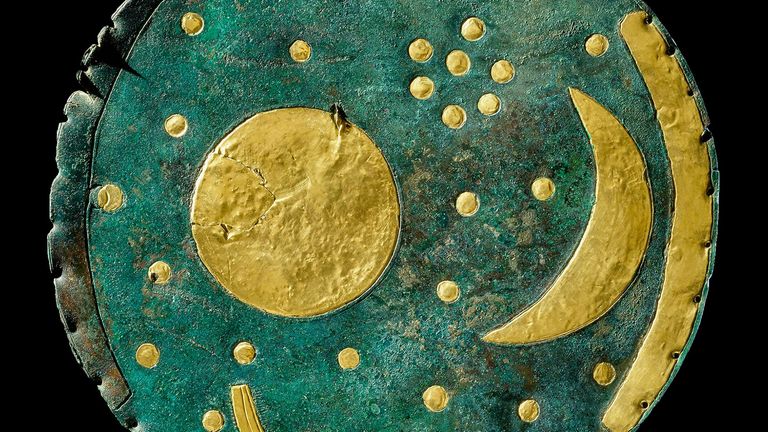 Image: The Nebra Sky Disc is a map of the stars. Pic: State Office for Heritage Management and Archaeology Saxony – Anhalt, Juraj Lipták

“It was a very poignant and powerful scene. The three children were buried in close contact with one another, two children touching and holding on to the elder child. The new drum was placed near their heads, almost to protect them from whatever awaits them in the next life,” Mr Wilkin said.

“It moves people to tears, it shows the vulnerability of the children. You can relate to and sympathise with that community at the time, the parents and the mourners who buried those children in the grave.

“They buried them with this spectacular object, kind of symbolic of their affection, but also a symbol of the religious beliefs of the time that they hoped would protect those children in the grave.”

There is also a small chalk ball that was found next to the children’s bodies. Image: Some of the items were found on a burial site in Burton Agnes in East Yorkshire. Pic: Allen Archaeology

“There’s something very powerful about it, despite the fact that it’s plain, it’s not decorated. You can see it resting in the hands of a small child or a toddler, and I think anyone with children can only sympathise with the loss. It’s an exceptionally rare discovery that lets us see a moment of tragedy, but also a moment of personal reflection as well.”

Packed full of artefacts that shed light on our early culture, there is also a mysterious hand thought to be around 3,500 years old, which experts say could be Europe’s oldest prosthetic limb. Made from bronze with a gold cuff, it may also have doubled as a knife.

Another stand-out piece is the Nebra Sky Disc, a bronze disc that is thought to be the world’s oldest map of the stars.

“It shows the depth of astrological knowledge people had 3,600 years ago,” Mr Wilkin said. “They had a real understanding of the appearance and disappearance of certain stars at certain times of the year, and they mapped that on to the disk, so it gives us an insight into the sophistication and knowledge of people living all those years ago.”