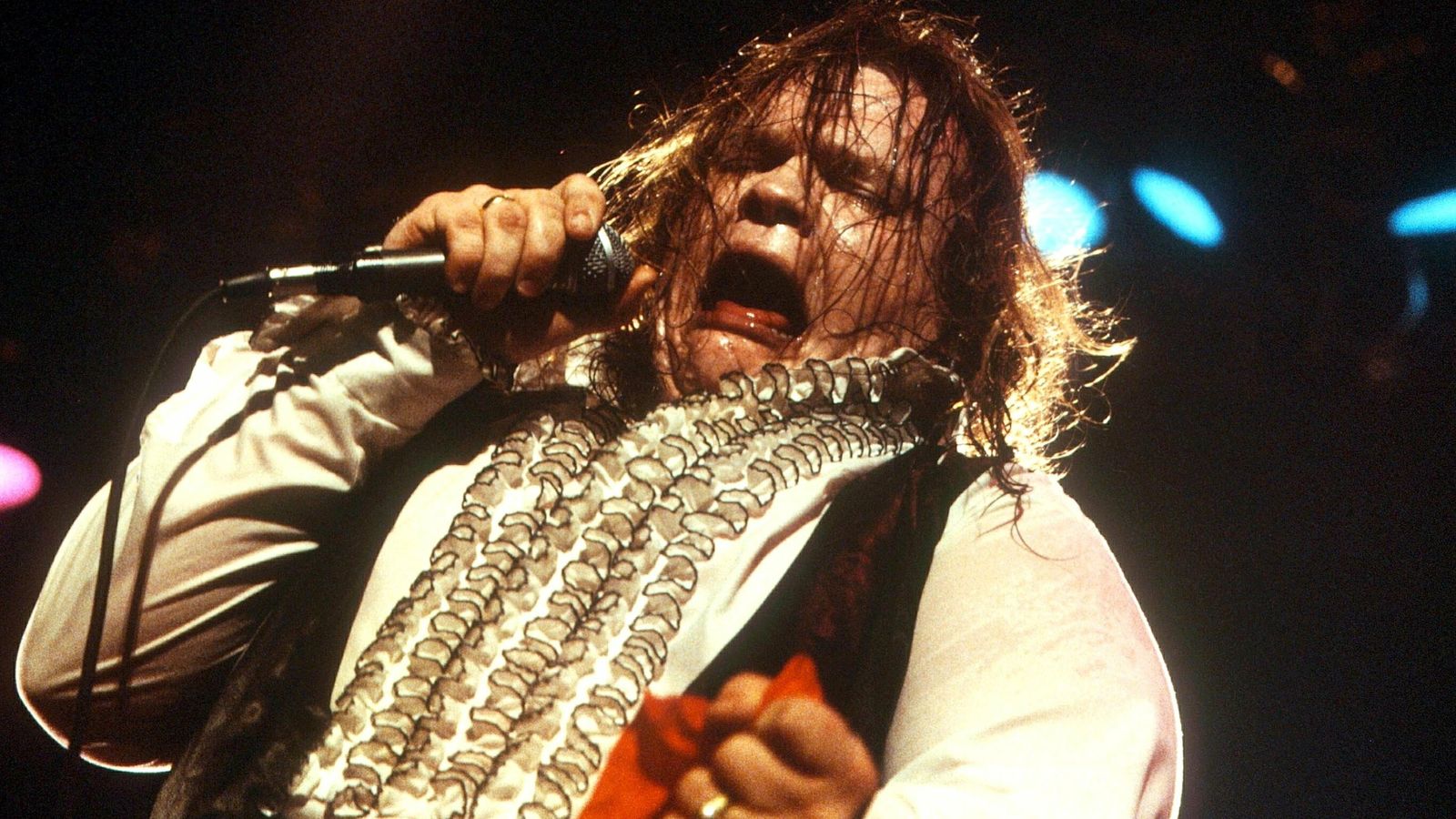 Meat Loaf, the American singer and actor, has died at the age of 74, a statement on his official Facebook page has said.

The statement said: “Our hearts are broken to announce that the incomparable Meat Loaf passed away tonight with his wife Deborah by his side. Daughters Pearl and Amanda and close friends have been with him throughout the last 24 hours.

Meat Loaf’s incredible career in pictures: A look back on the life of one of rock’s most iconic voices 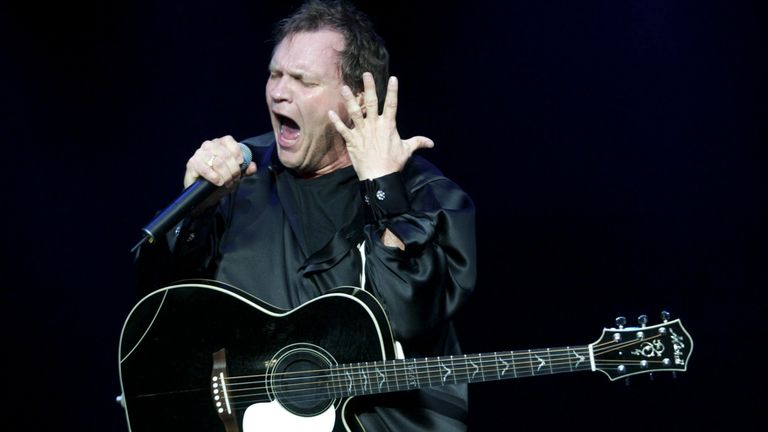 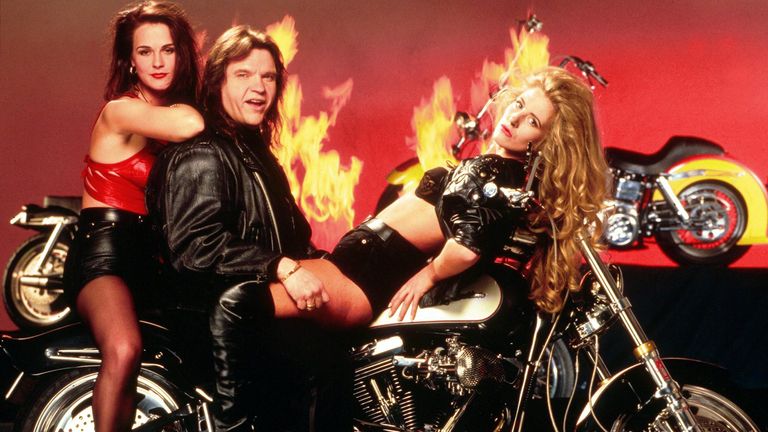 “His amazing career spanned six decades that saw him sell over 100 million albums worldwide and star in over 65 movies, including Fight Club, Focus, Rocky Horror Picture Show and Wayne’s World.

“Bat Out of Hell remains one of the top 10 selling albums of all time.”

The post added: “We know how much he meant to so many of you and we truly appreciate all of the love and support as we move through this time of grief in losing such an inspiring artist and beautiful man. We thank you for your understanding of our need for privacy at this time.

“From his heart to your souls… don’t ever stop rocking!”

In recent years, Meat Loaf had spoken openly about his health issues, notably asthma, which had led to him collapsing on stage in Wembley in 2003 and Pittsburgh in 2011.

He also collapsed while performing in 2016, with a statement later saying he had been suffering from “severe dehydration”.

The cause of death has not been revealed. 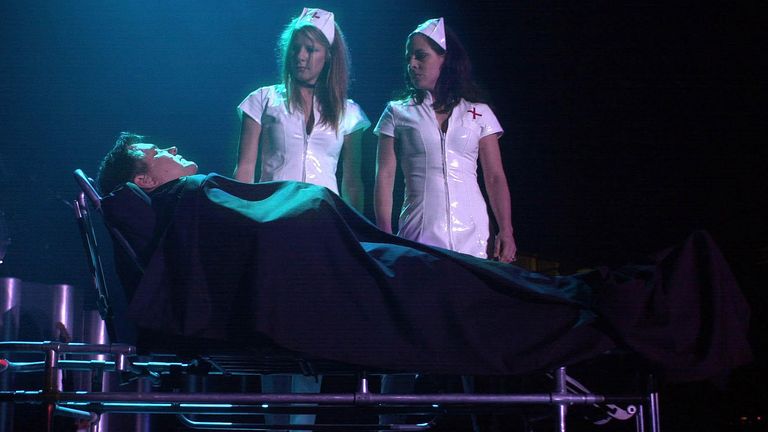 Image: Meat Loaf brought on stage on a stretcher during his concert in Dublin in 2003 – it’s after he had collapsed earlier in his tour 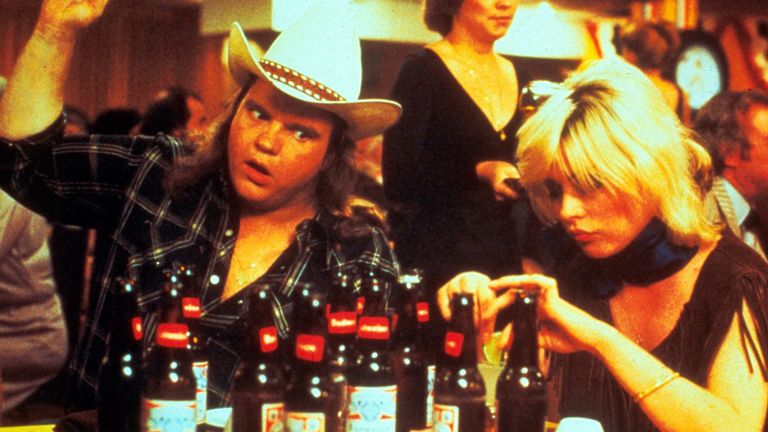 Iconic Bat Out Of Hell was biggest hit of his career

Meat Loaf was one of the most iconic voices in rock music, and tracks such as Dead Ringer For Love, Paradise By The Dashboard Lights and I’d Do Anything For Love (But I Won’t Do That) sold millions of copies during his career.

On-screen, his turn as Eddie in the original Rocky Horror Picture Show in 1975 was one of his first film roles, later appearing in huge box office hits such as Spiceworld: The Movie, Wayne’s World and The 51st State.

But it was Bat Out Of Hell which made him a household name.

It was written by his collaborator Jim Steinman (who died last year, aged 73), and went on to be released three times – though it only ever got to number 8 on the UK singles chart.

The album, however, which also featured tracks Heaven Can Wait, Two Out Of Three Ain’t Bad and All Revved Up With No Place To Go, remains one of the biggest-selling records of all time (alongside the likes of Michael Jackson, AC/DC and Whitney Houston), despite never reaching number one in the US or UK.

Bat Out Of Hell was also turned into a stage musical, written by Steinman, which is said to be based on Peter Pan.

It premiered in 2017 in Manchester and went on to get two West End runs, several tours, and productions in the US and Australia.

It is currently being played at the New Wimbledon Theatre and before the show, Rob Flower, who is starring in the musical, told Sky News: “Singing Paradise by the Dashboard Light will be very emotional and I have to keep in mind that it is for him so the sad emotions don’t take over because it is a celebration of his life and hopefully we do him proud tonight.”

The theatre held a minute’s silence for the rockstar ahead of Friday night’s show.

While the music world mourned the loss of one of the greats, Weber Grill apologised after it sent out a recipe-of-the-week email, featuring instructions on how to prepare “BBQ Meat Loaf”.

The outdoor grill makers email coincided with the news of Meat Loaf’s death and after sending the email Weber Grills said: “At the time we shared this recipe with you, we were not aware of the unfortunate passing of American singer and actor Mr Marvin Lee Aday, also known as Meat Loaf.

“We want to express our deepest apologies for this oversight and for any offence this email may have caused.”

The company based in Palatine, Illinois, offered its condolences to Aday’s family and fans.

You can watch more tributes to Meat Loaf on Sky Arts on Friday evening, with Discovering Meat Loaf at 6.30pm, followed by Classic Albums: Bat Out Of Hell at 7pm. You can also watch on Sky Q, Sky Glass and NOW.