LadBaby has enlisted the help of Sir Elton John and Ed Sheeran in an attempt to secure a historic fourth UK Christmas number one in a row.

YouTuber Mark Hoyle has made another food-themed tune to raise money for charity with Sausage Rolls for Everyone, which is a humorous take on Sheeran and Sir Elton’s own festive release Merry Christmas.

Mark and his wife Roxanne Hoyle, known as LadBaby Mum, shared the news that they would be trying to reach the top spot at Christmas againon Facebook along with the two world-famous musicians.

The latest attempt came about when Sheeran, 30, reached out to the Hoyles and offered support last Christmas.

The couple said: “We always said we’d only go for a fourth number one if we could make it bigger and raise even more money for the Trussell Trust.

“We approached Ed and Elton with an idea to do something that had never been done: to combine the music world with the social media world and join forces to make a difference to the people in the UK that need it most.

“Ed and Elton are pop royalty and they’ve both had huge success at Christmas, so we’re honoured and excited to be coming together to help families this Christmas and bring back some true Christmas spirit with the power of sausage rolls.”

All profits will be donated to Trussell Trust

100% of the profits will be donated to the Trussell Trust, a charity that provides emergency food parcels to people living in crisis.

It is expected to hand out more than 7,000 emergency food parcels a day this December. 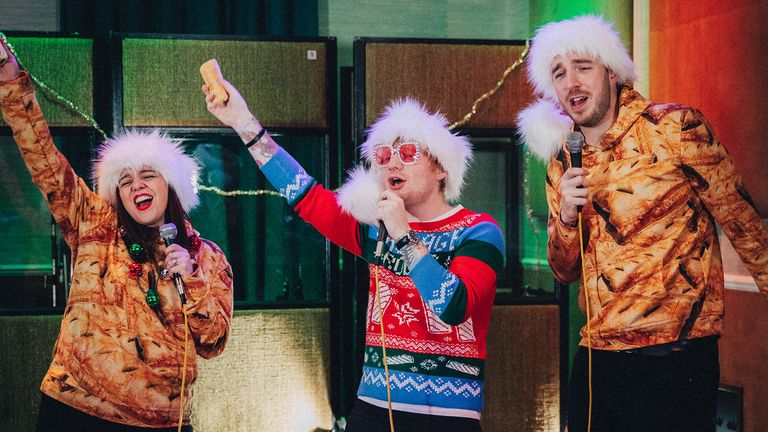 Image: ‘All profits will be donated to The Trussell Trust which is a very wonderful and important charity, so make sure you stream it, buy it and play it on repeat,’ said Sheeran 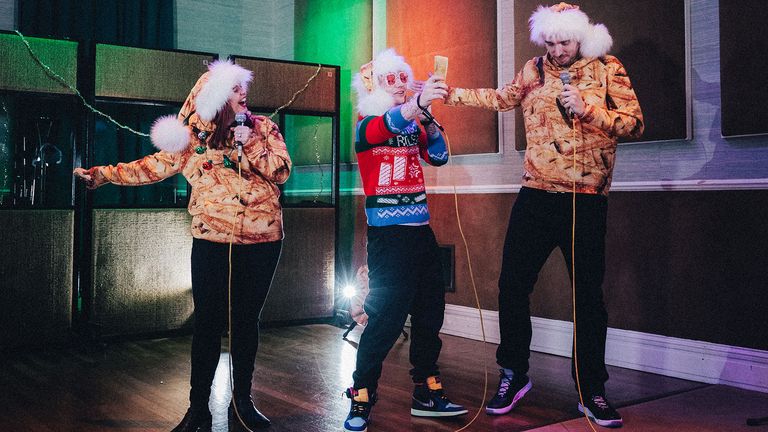 Image: Hoyle shared he wanted to ‘combine the music world with the social media world’ to make a difference

The Hoyles, who have amassed millions of followers on social media, are determined use their platform for good causes.

They said: “No-one should go to bed hungry, but today far too many do.

“Help us make history. We have to do whatever it takes to build a future where all of us can afford to go to sleep with a full stomach.”

If LadBaby secures the top spot, he will overtake the Spice Girls and Beatles for the most consecutive Christmas number ones. They are the only other acts to score a successive hat-trick.

His first Christmas number one came in 2018 with We Built This City, an ode to sausage rolls based on Starship’s 1980s glam rock hit.

“We are so grateful to LadBaby for their incredible support for a fourth year running,” said Emma Revie, chief executive of the Trussell Trust.

Revie added the campaign will help provide emergency support and makes key steps towards “a future where no one needs a food bank”.

Sausage Rolls for Everyone is released on 17 December.