Johnny Depp has told a court his ex-wife Amber Heard’s allegations of domestic violence and sexual abuse are “heinous and disturbing” – and that he is “obsessed” with getting to the truth.

Giving testimony for the first time on the fifth day of the libel trial, Depp began by admitting he and Heard argued during their relationship but said he “never” reached the point of hitting her – and “nor have I ever struck any woman in my life”.

He told the jury in Fairfax, Virginia, that his ex-wife’s allegations had come as a “complete shock” when he first heard them, and that they had “permeated” the entertainment industry and become “a global, let’s say ‘fact’, if you will”. 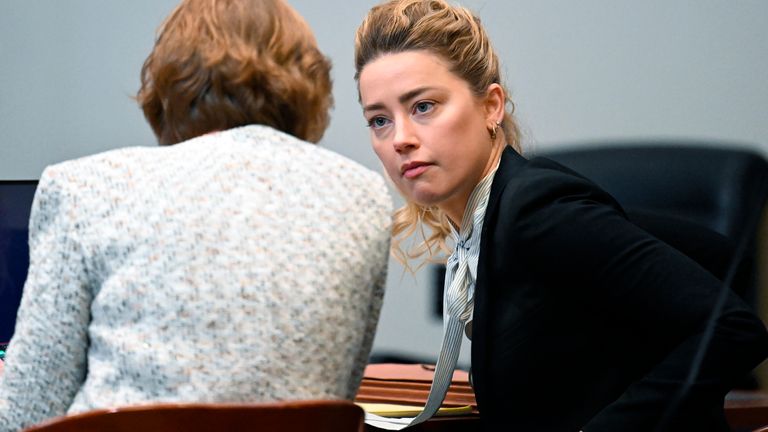 The actor said he felt he had to stand up for himself and his two children, Lily-Rose and Jack, whose mother is his former partner Vanessa Paradis. They were teenagers when Heard’s claims were first made public and it is “diabolical” they were exposed to the allegations while still at school, Depp said.

“I felt it was my responsibility to clear my name and my children of this horrid thing that they were having to read about their father,” he said. “My goal is the truth, because it killed me that people I’d met over the years… would think that I was a fraud and had lied to them”.

He went on to reference his current standing in Hollywood compared with his lucrative career before the allegations were made.

“It’s very strange when you’re Cinderella, so to speak, and then in 0.6 seconds you’re Quasimodo,” he said. “I didn’t deserve that. I pride myself on honesty and truth. Truth is the only thing I’m interested in, lies will get you nowhere. I’m obsessed with the truth.”

Key points from Depp’s testimony – Day 5 of the trial

• Depp admitted arguments with Heard but denied ever hitting her – and said allegations of abuse are “heinous”
• The actor said he knew the case would be embarrassing but he knows he is “doing the right thing”
• He apologised for vulgar text messages sent about his ex-wife, but said he uses humour to deal with pain
• Depp also admitted using drugs but said claims of “substance abuse” have been “grossly embellished”
• He also admitted he “felt something I shouldn’t have been feeling” when he first kissed Heard while filming, as he was still in a relationship with Paradis at the time
• Catch up on what has been said so far in our live reporting of the trial as it happens

The libel trial began more than a week ago, but, prior to his testimony, jurors – and viewers at home, as this is on camera – had only seen Depp sitting silently with his team of lawyers as revelations about his former relationship have come out in court.

As Heard’s lawyers predicted at the start of the trial, it has turned into something of a “soap opera”, with claims of drink and drugs binges, trashed rooms and the actor severing his finger being raised in front of the jury.

Wearing a dark suit and pale paisley tie, with his hair in a ponytail, Depp told the court on Tuesday that he knew the case would be “exposing” for both him and Heard, but that he had no choice but to defend himself against her allegations.

“It never had to go in this direction,” he said. “I can’t say I’m embarrassed because I know I’m doing the right thing.” 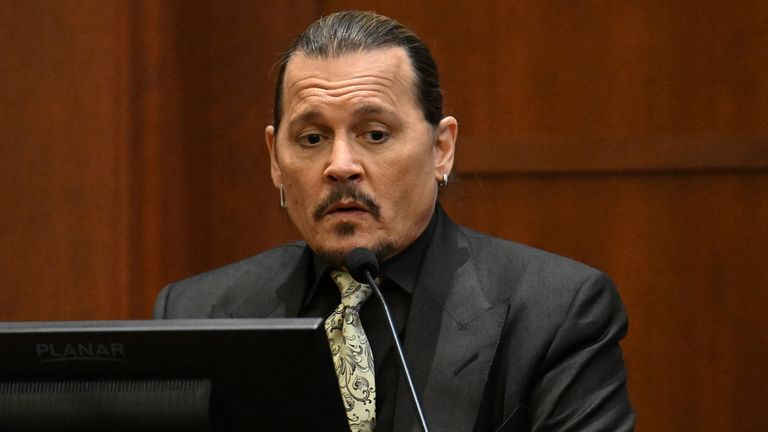 Image: Depp has denied hitting Heard during their relationship

Depp is suing Heard for libel for $50m (£38.2m), while Heard has issued a counterclaim for $100m (£76.4m). The case has been brought over a 2018 article she wrote in The Washington Post, which his lawyers say falsely implies he physically and sexually abused her.

The column did not mention Depp by name, but was titled: “I spoke up against sexual violence – and faced our culture’s wrath.” The actor’s lawyers have told the court it is clear Heard was referencing her ex-husband.

During his testimony, Depp told the court about his relationship with Heard, saying he initially thought it was “too good to be true” but did notice things that “might be a bit of a dilemma at some point”.

The actor was also asked about text messages he has sent that have been revealed in court so far, in which he used vulgar language about Heard, as well as his drinking and substance use.

Addressing his texts, he offered an apology to those who have read them, saying he is “embarrassed and ashamed” but that he has a dark sense of humour and “sometimes pain has to be dealt with with humour”. 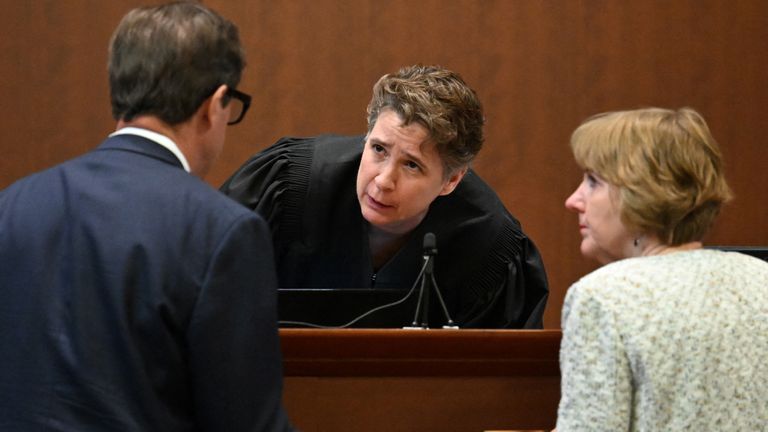 On his drug use, he said it had been a way to “numb the ghosts” of his youth, and was “self-medication” rather than what he often observed in others of wanting “to go party”.

However, he told the court that details of his “substance abuse” had been “grossly embellished” in court and a lot was “plainly false… an easy target for [Heard]”. He continued: “I am not some maniac who needs to be high or loaded all the time.”

The actor told the court his drug-taking had started at the age of 11, when he took his mother’s nerve pills “to escape feeling so much”.

“[It’s] a pretty young age to do that, I can’t say that I’m proud of admitting to that but I have to say that I knew not what else to do,” he said.

Speaking about first meeting Heard, he told the court how they worked on the film The Rum Diary together and described filming a scene in which their characters kissed – saying he “felt something I shouldn’t have been feeling”.

Image: Heard and Depp met on the set of The Rum Diary, which was released in 2011

Heard was in a relationship with her ex Tasya van Ree at the time, while Depp was still with Paradis. “She had a wife, and I had Vanessa and the kiddies,” Depp told the court.

After this kiss on set, the pair later kissed in his trailer, he said, but nothing else happened until promotion for the film two years later.

Their relationship was good for the first 18 months, he said, but later became problematic.

How Pirates Of The Caribbean changed actor’s life

Depp also told the court about his roles in the Pirates Of The Caribbean films, explaining that after the success of the first, which was released in 2003, he was forced to increase his security to protect his family.

A queue of a couple of dozen Johnny Depp fans wait for hours to collect their coloured wristbands to gain access to the court and get the seats closest to the actor.

Many of them relay the experience on their own social media accounts, particularly on the most eagerly anticipated days of this trial.

On the morning Depp is due to give evidence, there is no sign of the woman who showed up one day with a brown alpaca on a lead and a “justice for Johnny” sandwich board hanging around its neck.

Depp makes a more low-key entrance, arriving through a rear entrance to the courthouse.

In the backseat of a black SUV, he has rolled down the window just enough the stick his arm out and give waiting photographers a wave.

With arguably the most important performance of his life ahead, he skips into the court with a brief salute to the camera.

Amber Heard arrives in the front passenger seat of a smaller saloon car with makeshift curtains on the windows preventing anyone or any camera lenses from seeing in.

Inside the court, Depp usually sits adjacent to Heard.

But as he’s on the witness stand, he is directly in his ex-wife’s eye-line and she glares at him throughout three hours of testimony, only averting her stare to make notes occasionally.

“I’ve had worse jobs… [but] you realise that anonymity has left the building,” he told the court. “It does mean you have to think creatively when you have little kids on how to take them to the park or the swings. It becomes a strategic mission.”

He added: “Security guards kind of multiplied because you need to protect your street, your house, your kids. Endless.”

Depp and Heard: The background

The former couple started dating after meeting on the set of the 2011 film The Rum Diary, and married in Los Angeles in February 2015, followed by a ceremony in The Bahamas.

Heard obtained a restraining order against Depp in May 2016 after accusing him of abuse, which he denied, and the pair settled their divorce out of court in 2017. 1:57 Earlier in the trial: Depp’s friend tearful in court

Many of the witnesses involved in this case in the US were previously called to give evidence in Depp’s 2020 trial in London, in which he sued the publisher of The Sun newspaper over an article that referred to him as a “wife-beater”.

The judge in that case found the claims in the article to be “substantially true” and Depp was later refused permission to appeal the case at the Court Of Appeal.

In the libel case in Virginia, Depp is suing Heard, not the publication. Fairfax County state court judge Penney Azcarate is overseeing the trial, which is in its second week and is expected to last for six weeks in total, with a week’s break in May.

Witnesses called by Depp’s lawyers so far have included the actor’s sister, friends, and a doctor and a nurse who said they treated him for substance abuse. All have said that while they may have been aware of arguments between Depp and Heard, they did not witness physical abuse by Depp toward Heard.

A couples therapist who has testified told the court she believed there was “mutual abuse” between the pair.