A new year in Hollywood usually means the likes of Ricky Gervais or Tina Fey and Amy Poehler getting ready to take down the great and the good of Tinseltown for the first and most raucous show of awards season.

But that’s not the case for the Golden Globes in 2022.

The ceremony that kick-starts the awards race, usually the biggest in the run-up to the Oscars, is going to look very different after making headlines for all the wrong reasons in 2021, with criticism over diversity among its membership and allegations of inappropriate freebies being given to influence votes. 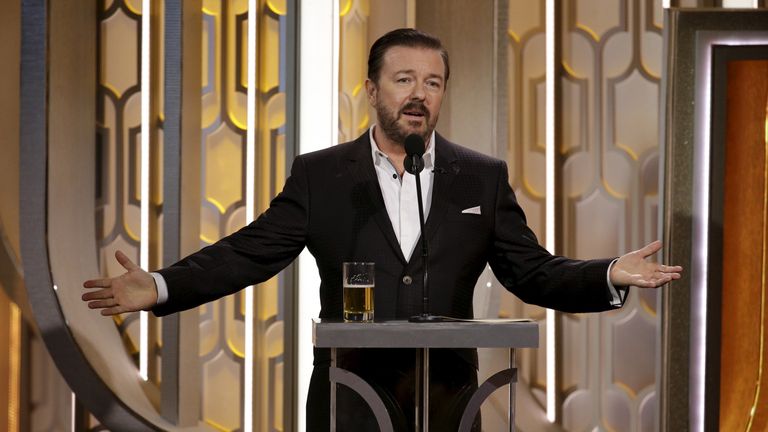 Image: Ricky Gervais has hosted the awards ceremony several times and is known for his acerbic takedowns of Hollywood stars

Despite the nominations being announced in December, the event is being held in private and few details have been released beforehand.

Front-runners include Kenneth Branagh’s Belfast, Jane Campion’s Power Of The Dog and Steven Spielberg’s West Side Story in the film categories, while Succession, The Morning Show and Ted Lasso are all nominated in several TV categories.

But will the winners accept their awards, virtually at least if not in person? Here’s what happened in 2021 – and what has changed for 2022. 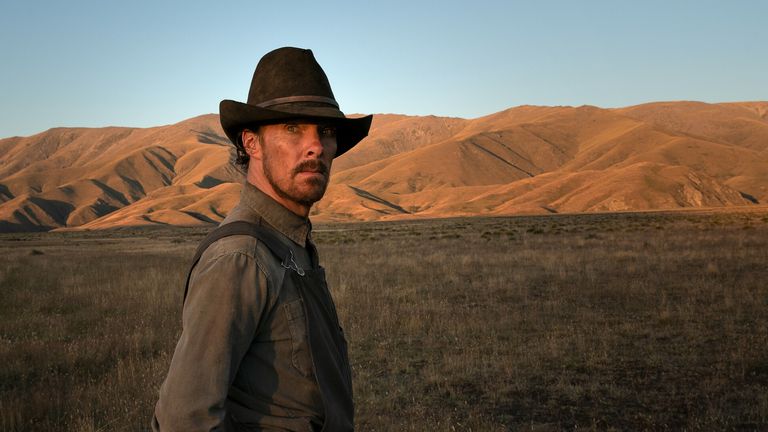 Image: Power Of The Dog, starring Benedict Cumberbatch, is one of the front-runners in the film categories. Pic: Kirsty Griffin/Netflix

In February 2021, the Hollywood Foreign Press Association (HFPA) – the organisation behind the Golden Globes – faced significant criticism after it emerged none of its members were black.

At the time, the voting body was made up of around 80 members, a report in the Los Angeles Times found.

The HFPA quickly issued a statement to say it was working on “an action plan” to recruit black members and the ceremony went ahead in March rather than its usual January date, with the delay caused by the pandemic.

The Emily In Paris controversy 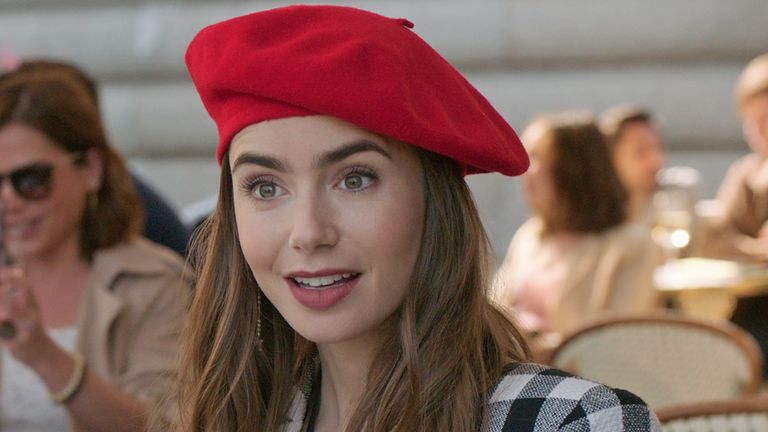 As well as diversity, questions were also raised around alleged discriminatory practices and whether relationships with Hollywood studios influenced the choice of nominees and winners.

The Los Angeles Times exposé reported on a “culture of corruption” at the HFPA, which included members “exchanging votes for perks and access [to celebrities]”.

When it was revealed that the somewhat criticised Lily Collins series Emily In Paris – widely regarded as fun but lightweight – had scored two major nods, while Michaela Coel’s critically acclaimed I May Destroy You had been snubbed, there was outcry on social media – even an Emily In Paris writer had something to say about it, writing an opinion piece for the Guardian.

In its report, the LA Times claimed that the Paramount Network, which produces Emily In Paris, had treated several Golden Globes voters to a lavish set visit that included a five-star hotel stay, with rooms costing about $1,400 (about £1,033) a night. In May 2021, the Globes’ broadcast network, NBC, which had aired the awards for several years, said it would not be showing the ceremony in 2022.

Hollywood megastar Tom Cruise reportedly returned his three Golden Globe awards for his roles in Jerry Maguire, Magnolia and Born On The Fourth Of July in protest.

And Scarlett Johansson said she would no longer work with the HFPA unless it made significant changes, while platforms including Netflix, Amazon Studios, WarnerMedia and dozens of Hollywood’s top publicity companies also called for reform.

Sky News understands that Netflix still does not believe the HFPA has gone far enough in its reforms, and that it did not enter any of its content for submission, despite the numerous nominations.

HFPA member Husam Asi gave a rare interview to Sky News, admitting a need for reform and saying bosses should be held accountable for the lack of diversity in the organisation.

Audience numbers for the ceremony had plummeted to less than six million US viewers – down from 18.4 million in 2020 – following a difficult year for the industry caused by COVID restrictions.

After particularly scathing take-downs by host Gervais in 2020, and the poor viewing figures in 2021, could the controversial history of the HFPA be the final nail in the coffin? Is real change in Hollywood on the horizon? Or will this be a one-off? Image: Succession is a favourite in the TV categories. Pic: Sky UK/ HBO

The HFPA says it has worked “tirelessly” to make change and has “completely overhauled its bylaws, implementing sweeping changes from top to bottom addressing ethics and code of conduct, diversity, equity and inclusion, governance, membership and more”.

The organisation said it admitted its largest and most diverse class to date in October, with 21 new and “predominantly diverse” journalists joining as members, and almost half its members are women.

“There are now people of colour involved in decision-making throughout the organisation – from major board decisions, to credentialing and selecting new members,” it has said.

It has also brought in a ban on gift-giving from studios to its membership, in an effort to stop them apparently trying to influence the board.

Where and when does the ceremony take place? Image: Few details have been released about who might be attending this year’s ceremony

Despite the backlash this year, the HFPA has pressed ahead with the awards and the ceremony will be held at the Beverly Hilton in Los Angeles, starting at 6pm local time on Sunday (2am on Monday in the UK).

That, we don’t know. Details are yet to be released, if there is even a host at all.

How can I watch?

Sorry, you can’t. After being dropped by NBC, the 2022 event will take place behind closed doors, with no broadcast or live-stream. An HFPA spokesperson said the ceremony would be a private event but real-time updates on winners will be posted on the Golden Globes website and social media channels.

Which celebs will be there? Image: Scarlett Johansson, pictured at the Globes in 2020, is unlikely to make an appearance after speaking out against the awards last year. Pic: Jennifer Bloc/Geisler-Fotopress/picture-alliance/dpa/AP Images

Sky News understands no major celebs will be there – instead only HFPA members and grandees will be in the room.

Hollywood stars have been largely silent on the nominations this year, and the HFPA – usually keen to highlight in advance the vast array of celebs confirmed for the red carpet – has not provided details.

However, it has confirmed there will be no red carpet this year, which gives the impression it’s going to be a low-key night.

Sky News has contacted several nominees to see if they will be accepting their awards, even if only through social media.

But we do know who’s nominated! This, we can tell you. The films up for best drama are Belfast, CODA, Dune, King Richard and Power Of The Dog, while Cyrano, Don’t Look Up, Licorice Pizza, tick, tick… BOOM! and West Side Story are in the running for best musical or comedy.

In the TV categories, Lupin, The Morning Show, Pose, Squid Game and Succession are nominated for best drama, while The Great, Hacks, Only Murders In The Building, Ted Lasso and Reservation Dogs make up the shortlist for best musical/comedy series, and Dopesick, Impeachment: American Crime Story, Maid, Mare Of Easttown and The Underground Railroad all have nods for best motion picture.

For more on the nominees, see our complete list here. Image: Jason Sudeikis wore a hoodie to appear virtually at the Golden Globes in 2021, due to COVID-19

The rise of the Omicron variant has spoiled the party even more. The HFPA has said there will be no audience at the ceremony, with precautions being taken for “select members and grantees” who will be in the room.

They will need proof of vaccination and booster shot, along with a negative PCR test within 48 hours, and all guests will have to wear masks and be socially distanced.

What else has the HFPA said? 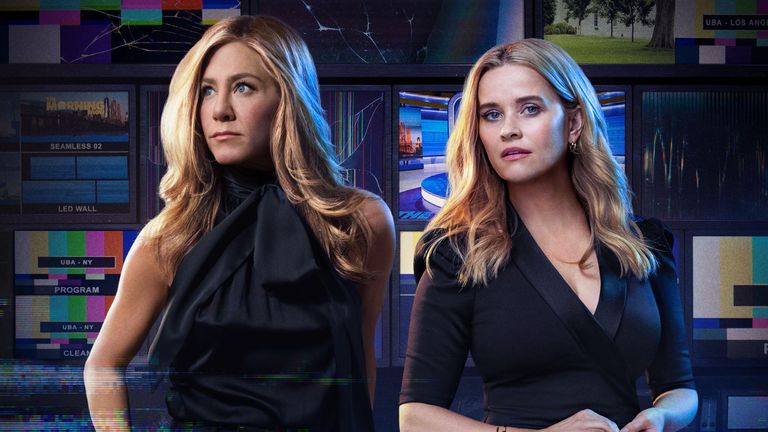 Not much. In a statement confirming when the winners will be announced, it said that in addition to the awards the ceremony “will shine a light on the long-established philanthropy work of the HFPA”.

The organisation has donated $50m (about £37m) to more than 70 entertainment-related charities, film restoration, scholarship programs and humanitarian efforts over the past 25 years, “many of whom were hit hard over the last two years as a result of the pandemic”, it said.

During the event, Kyle Bowser, senior vice president of the NAACP (National Association for the Advancement of Coloured People) Hollywood Bureau, will discuss the Reimagine Coalition – a joint five-year initiative to increase diversity, equity and inclusion across the global entertainment industry.

“Each year the HFPA and the NAACP Hollywood Bureau will collaborate on, fund, and support a series of trailblazing initiatives, with the overall goals of ensuring visibility of projects from artists of diverse racial and ethnic backgrounds; increasing diverse representation in the industry; and building pathways to inclusion for young artists and journalists of colour,” the HFPA said.

The Golden Globes winners will be revealed on Sunday 9 January

Next post Spider-Man: No Way Home blocked from BAFTA nominations