A songwriter who claims Ed Sheeran ripped off his music, says the first time he heard Shape Of You he was so shocked that he and his girlfriend – who were driving at the time – had to pull their car over.

Sheeran, and his co-songwriters Johnny McDaid and Steve Mac, who were cross-examined in court during the first week of the copyright trial deny any wrongdoing. Image: The songwriter says Shape Of You infringes part of his song

In his first day giving evidence, Mr Chokri (who performs under the name Sami Switch) told the High Court he was “truly in pain” when writing Oh Why due to financial problems and mental health issues at the time.

He said: “At the time I was going through some personal problems, which we would talk about. I was close enough to Ross to open up about my mood of self-pity.”

He said that after “drinking some wine” he had sung the “oh why, oh why, oh why?” hook to his co-songwriter Mr O’Donoghue, who had responded along the lines of: “‘That’s it! Let’s work on that’.” 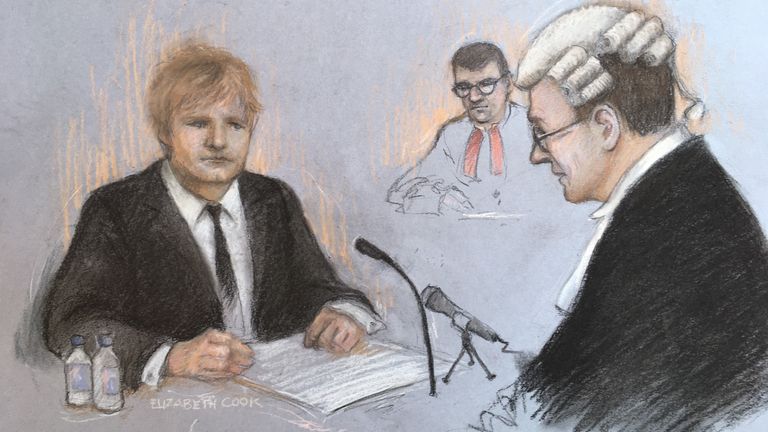 Mr Chokri told the court the song was “personally revealing”, adding: “When you translate a real feeling of pain into a song, it is a cathartic process and the song acts as a therapy.”

He called the track “pretty special” and “a little bit different to anything else that I had made”.

He wrote: “In 2017 a few of my friends said that the new song by Ed Sheeran sounded incredibly similar to my song, Oh Why.

“I recall the moment I first heard Shape Of You. I was a passenger in my girlfriend’s car and Shape Of You came on the radio.

“She and I were both shocked to hear the similarities in the hook of Oh Why and Shape Of You. She pulled over the car and we said this is what everyone is talking about.”

Mr Chokri’s written evidence also said that he had first wanted to share his music with Sheeran to help promote it and was encouraged by the fact that both he and Sheeran had worked with SBTV founder Jamal Edwards and had both recorded at the same studio.

He said he had been “inspired by [Sheeran’s] success and stardom”. Image: One of the song’s co-writers Johnny McDaid of Snow Patrol

Sheeran has previously said he is in court to “clear my name” and denies starting legal action to intimidate the two songwriters.

Sheeran and his co-writers began legal proceedings in May 2018, asking the High Court to declare they had not infringed Mr Chokri and Mr O’Donoghue’s copyright.

In July 2018, Mr Chokri and Mr O’Donoghue issued their own claim for “copyright infringement, damages and an account of profits in relation to the alleged infringement”.

The trial – which being overseen by Mr Justice Zacaroli and is set to last three weeks – continues.