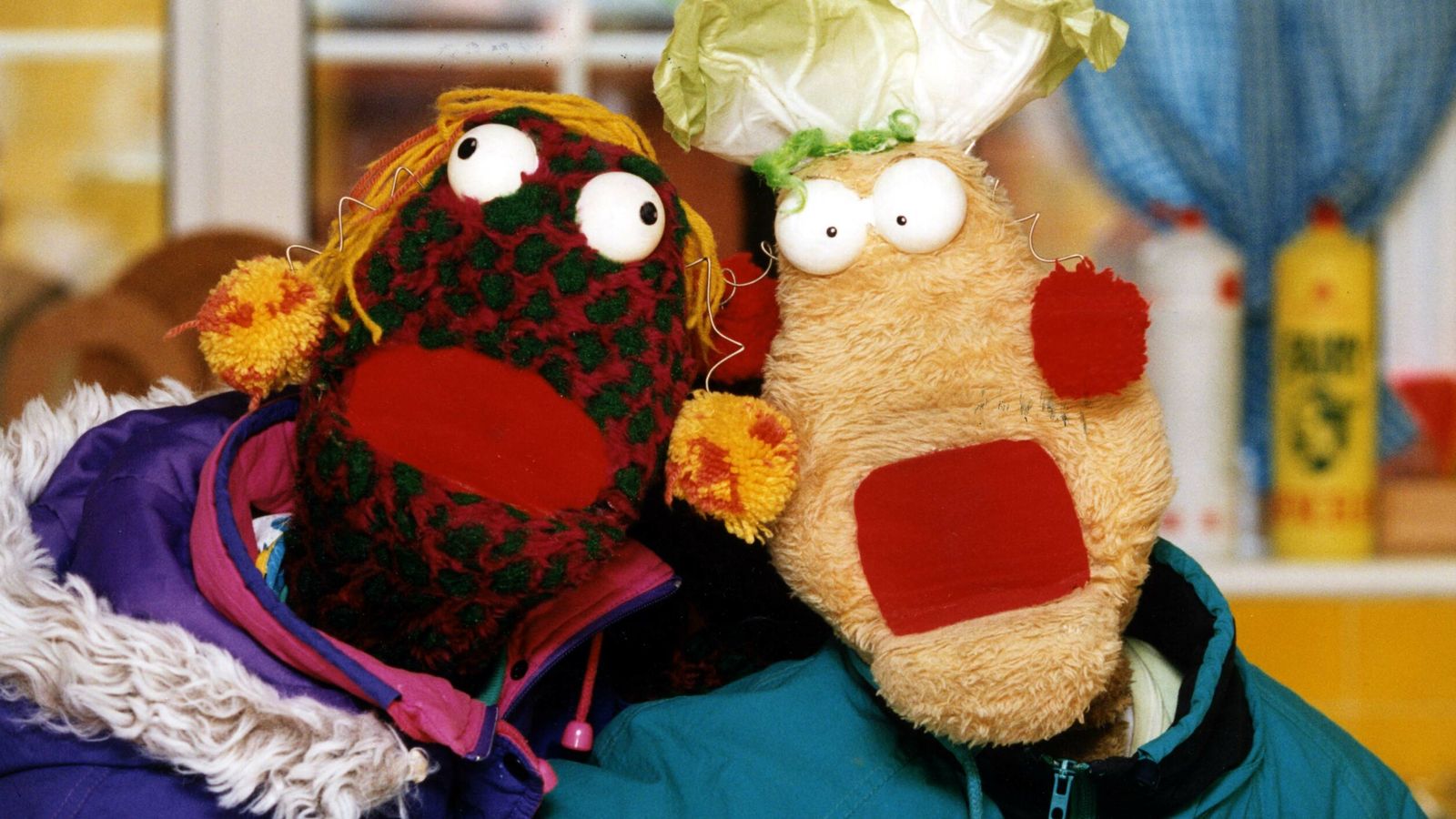 From British TV’s first female same-sex kiss before the watershed to the naughtiness injected into morning viewing with The Big Breakfast, not to mention Big Brother starting an era of reality TV, Channel 4 has always done things differently.

Launching 40 years ago with Richard Whiteley introducing the now long-running afternoon favourite Countdown, this was a commercially funded way to deliver to under-served audiences and break up the duopoly of ITV and the BBC.

Channel 4 was designed to be disruptive. In recent years, it has normalised different body types with full-frontal nudity in Naked Attraction, delivered 24 hours of programming featuring only black presenters, actors, writers and experts, and brought us the masterful (and now leading BAFTA-nominated) drama about the AIDs crisis, It’s A Sin. 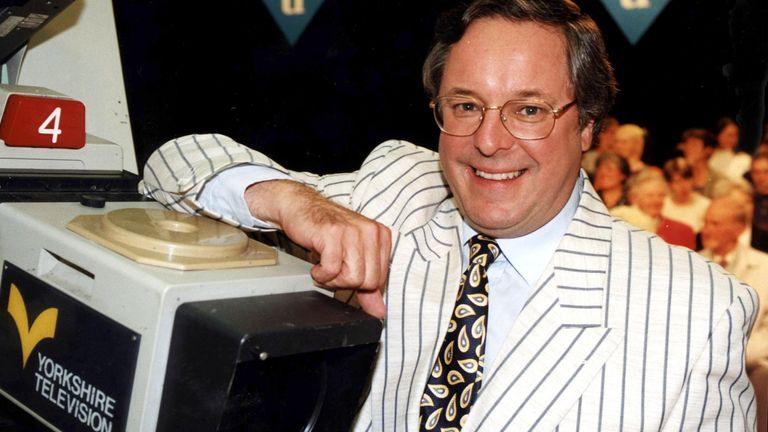 Currently owned by the government, it is in a unique position in that it receives its funding from advertising, not the taxpayer. The government has argued that the broadcaster’s long-term future needs to be secured amid concerns for its survival in the streaming era, with Culture Secretary Nadine Dorries saying its ownership is holding it back.

After launching a public consultation into a potential change in July 2021, Ms Dorries has been working through 60,000 responses. On Monday, the broadcaster was informed of the decision to go ahead with the sale.

As a channel that has pushed boundaries, will a sale lead to it losing its edge? Many in the creative industry certainly think so. A petition calling on Boris Johnson to stop the privatisation garnered more than 40,000 signatures (and counting) in less than 24 hours.

What have critics of the move said?

Russell T Davies, the creator and writer of It’s A Sin, has previously said privatising Channel 4 would be a “great crime” that would result in programmes like his hit series not being made. Nathaniel J Hall, one of the stars of the show, agrees, telling Sky News he is “hugely disappointed” by the move.

Read more:
It’s A Sin star on contracting HIV at 16 and the ‘unhealed wound’ of the AIDS crisis “A programme like It’s A Sin would struggle to get programmed on a privatised Channel 4,” he said. “In fact, the production was turned down by a number of other channels. Channel 4 fosters diverse and engaging TV that reflects modern Britain and at the recent Royal Television Society Awards, Channel 4 productions swept the board.

“It’s the gleaming gem in the UK’s outstanding broadcast portfolio. Privatisation will be the death knell of its creativity and fierce independence.”

Like Hall, writer and director Edgar Wright (Baby Driver, Hot Fuzz and Shaun Of The Dead) was among those sharing the petition online, while The Thick Of It, Veep, and I’m Alan Partridge creator Armando Iannucci tweeted: “Why do they want to make the UK’s great TV industry worse? Why? It makes no business, economic or even patriotic sense.”

And it is not just those in the creative industries criticising the decision, with Tory MP Sir Peter Bottomley saying it is “bad for the diversity of television, bad for viewers and bad for independent producers”. Labour’s shadow culture secretary Lucy Powell has described privatisation as akin to “cultural vandalism”.

What do analysts say? 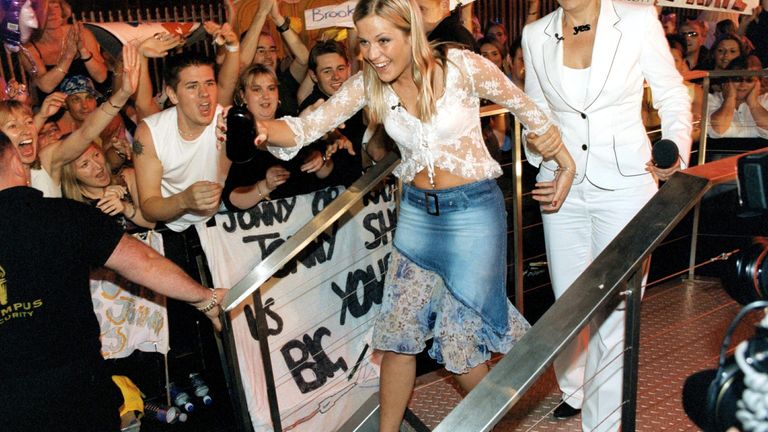 Image: Kate Lawler, winner of the third series of Big Brother, pictured with host Davina McCall as she left the house in 2002

“You have to consider that people don’t watch high-end dramas end-to-end all the time, what they do is they watch a whole range of different programming. Channel 4 is obliged to offer news, current affairs, documentaries, all kinds of programmes which are made with a very distinctive British voice.

“Some of them are very low budget, so although the visible signs of competition tend to be whether you’ve got an amazing new franchise based on Lord Of The Rings to land, actually the bread and butter of TV and TV advertising is made of daytime shows, of late nights, of all kinds of programmes that people like to plonk into…

“Channel 4 really is a very cutting edge broadcaster with a very strong base in young viewers, which is extremely attractive to advertisers. Advertising is not a feature of Netflix, it’s not a feature of Disney+. It’s not actually in direct competition with anyone. It is in fact a free-to-air broadcaster, universally available.

“It’s got a completely different model from Netflix and should never be compared to Netflix. It’s only politicians, who don’t understand the difference between one thing and another, who compare all of these businesses in some sort of way.”

So what happens next?

A spokesperson for the broadcaster said it was “disappointed” with the decision, but would “continue to engage” with the government to “ensure that Channel 4 continues to play its unique part in Britain’s creative ecology and national life”. 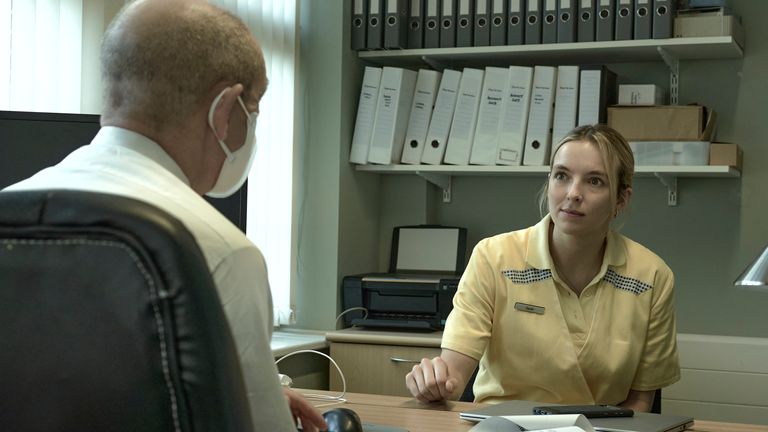 Image: Ian Hart and Jodie Comer in Help, the BAFTA-nominated drama about a care home during the pandemic. Pic: Channel 4

The channel explained that it had presented the government with an alternative to privatisation that would “safeguard its future financial stability” and allow it to do more for the public, creative industries and the economy.

In an internal email sent to staff on Monday, Channel 4 chief executive Alex Mahon said there would “now be a long process ahead” and it could take 18 months or more for the required legislation to pass through the House of Commons and then Lords.

“During that time, we’ll continue to work with DCMS (Department of Culture, Media and Sport) and government, and with our supporters across the industry to make the arguments to ensure that Channel 4 can continue to deliver its remit,” she said.

The DCMS has said further details will be announced “shortly”.

Who could buy Channel 4 and how much could it be sold for?

Foreign ownership has not been ruled out, as long as Ofcom’s “fit and proper” test for ownership is passed, according to reports.

The Telegraph reported that ITV is understood to be interested, while Discovery has held informal talks and Rupert Murdoch has been linked to a possible takeover.

No price tag has been set by the government yet, but reports suggest the channel could be sold for as much as £1bn.

Ministers have said they will seek to reinvest the proceeds into the creative industries.